CHINESE OFFICES ON THE WAY

Bart Kasteleijn (of Counsel at HEUSSEN), was this month interviewed by the official journal of the Dutch Bar "Advocatenblad", about the 30th anniversary of the Interpacific Bar Association (IPBA). Bart Kasteleijn highlighted the rise of Far Eastern lawfirms represented in general and of Chinese law firms in particular. Read the whole article below (unofficial translation). To read the original (Dutch) article, click here 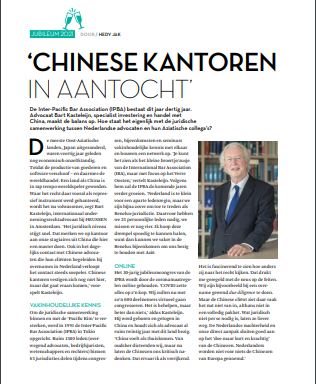 The Inter-Pacific Bar Association (IPBA) celebrates its 30th anniversary this year. Lawyer Bart Kasteleijn, specialist in investment and trade with China, evaluates. What is the state of legal cooperation between Dutch lawyers and their Asian colleagues?

Most East Asian countries, with the exception of Japan, were still not economically independent forty years ago. Until the production of goods and software shifted - and with it, world trade. A country like China has rapidly become a world player. Whereas historically the approach to law there was overly legalistic, now it has matured, says Bart Kasteleijn, international business lawyer with HEUSSEN in Amsterdam. 'The legal level is rising fast. We notice this at the office through our trainees from China who are doing their Masters here. Also in the daily contact with Chinese lawyers who assist their clients in acquisitions in the Netherlands the contact is getting smoother. Chinese firms are not yet establishing themselves here, but they will soon' predicts Kasteleijn.

PROFESSIONAL KNOWLEDGE
The Inter-Pacific Bar Association (IPBA) was established in Tokyo in 1991 to strengthen legal cooperation within and with the Pacific Rim. Over 1,500 members (mainly lawyers, corporate lawyers, academics and judges) from 65 jurisdictions share professional knowledge and build a network during conferences, meetings and seminars. The IPBA is like a little brother/sister of the International Bar Association (IBA), but with a focus on the Far East,' says Kasteleijn. According to him, the IPBA will continue to grow in the coming years. The Netherlands is too small for a separate member region, but we are almost ready to join as a Benelux jurisdiction. To be able to join, we need 25 personal members, we are still missing four. We hope to reach this threshold soon, because then we can meet more often in the Benelux to engage on Asia.

ONLINE
The IPBA's 30th anniversary conference will be held online, due to the corona measures. COVID turned everything upside down. We will now have a virtual congress with some 600 participants. It's a bit of a struggle, but better than nothing at all,' says Kasteleijn. He was born and raised in China and, as a lawyer, has been involved with this country for over twenty years. China feels like coming home. Traditionally, we dictated, but now the Chinese make us think critically. That’s enriching.

It is fascinating to see how differently Chinese see the law. It regularly forces me to face the facts. We are, for example, used to doing due diligence in case of an acquisition. But the Chinese client often does not see the point of doing so, at least not in a complete due diligence package. Anything that is not legally necessary, they prefer to skip. The Dutch no-nonsense and direct approach fit in well with the ‘brief and to the point-approach' of the Chinese. It’s not without reason that the Dutch are called “the Chinese of Europe“.